58 days into the new year, and I'm finally bothered enough to blog. Add that to the hundreds of days of last year when I couldn't be bothered to update, and you get one helluva dusty website.

Before I started ranting any further, and trust me, I will rant till my fingers bleed (or at least until the match starts),

I only made one proper resolution this year and am very close to breaking it. Its pathetic to think that its only 58 days in. Resolutions are hard. Which is why I prefer to make my resolutions as vague as possible. They're a lot harder to achieve but are also a lot harder to break. Call me unmotivated, because you're exactly right.

The year 2009 ended rather nicely. In early December I finally had the chance to go to the Langkawi International Maritime and Aerospace Exhibition (LIMA). I don't have the best of memories but what I do remember is watching the adverts on telly when I was 9 in my living room. At that moment, the iconic logo with what looked like a paper plane flying against the sunset was forever emblazoned in my mind.

Been wanting to go ever since. Of course, being 9, you hardly have the power to persuade your parents to go all the way to Langkawi and look at planes in the hot, hot rays. The same thing happened throughout my whole childhood and teenage years. Then, when I was 21 and studying in uni, our student society planned a trip to LIMA '07. I was beyond psyched and even helped out a bit in organizing the trip. Finally, November came and I was in Bandung as part of a student attachment program. As much as I wanted to go to LIMA '07, Bandung was an easy choice for me. A chance like that doesn't come around often and LIMA comes around once every 2 years. Bandung wins hands down. 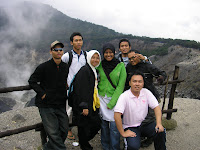 So, roughly 14 years after I first learned of the awesomeness that is LIMA, I finally got to go. And what an awesome time I had. Its awesome that you get to go to a place like this after all those years of waiting, but its even more awesome when you get to that place with people who share your passion. And Langkawi is a beautiful place anyway you look at it so I knew even if the exhibition didn't live up to my expectations (which it did), Langkawi would always be good fun. 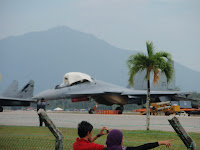 We spent the better part of our first day in Langkawi at the airshow. I was pretty much on a high the whole entire time. Hearing those engines really make your adrenaline pump. And I've never been a helicopter person before. Seeing the Apache carry out manouvres completely changed my mind. I can't remember the immediate few hours after the airshow, but the night that followed was nice and quiet. The kind that's all too perfect for falling in love. *sigh* I think I'll leave it at that.

Anyhow, LIMA kept me on a high for the next few weeks. But come new year, the awesomeness went up several notches.

Dude got engaged on the first day of the year. The days leading up to the engagement ceremony were stressful but then seeing how happy she was, and how happy everyone was on that day really made up for it. Dude's the first born so she's not really the, for lack of a better English word, manja type. Its really nice knowing that someone would manja-kan her for a change. And it shows. When they're together, she's not the scary first born I'm used to.

So, the weekends following the engagement ceremony were spent rather quietly. Until the 23rd of January that is.

That Saturday, I went on my first interstate go-karting trip. In May 2009, me in some people from the office went go-karting. But back then, we only made the short trip from our comfy homes to Shah Alam. We had fun. It was short and sweet and everyone had a blast of a time and pictures to prove it.

This time though, a colleague took up the challenge of organizing a day out at the Melaka International Motorsports Circuit (MIMC). He did an excellent job at it. Possibly to make amends after his picnic plan a few months before never materialised. The circuit is more than a kilometre long and from above, it looks similar to the snake from the 'snake game' on them earlier nokia phones after you've past level 10. Except more curves and less right angles.

I have to admit that on the road, I like to go fast whenever I can. But go-karting is levels different from everyday driving. There's no power steering, you're inches above the ground and there's no windshield to protect you from flying debris. I feel perfectly at home driving past 120km/h in my car but seriously, I doubt that I went above 50km/h in them go-karts. Needless to say, I didn't get a podium finish.

Having said that, I had such a great time watching the rest of the guys engage in a really good race. These guys are model drivers. You know, the type who follow the speed limit, are always courteous on the road (yep, they do exist) and would never violate traffic rules. But out there on the circuit these guys really went for it. It was such a pleasure to watch, despite the heat. 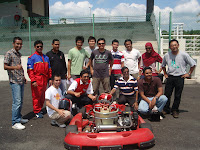 The activities with the guys from work continued a fortnight after. On the 6th of February, we ran the Putrajaya Night Marathon. It was the first ever night marathon in the country and although I'm not the athletic, running type, I couldn't pass up the chance. Besides, I reckon it was a good way to soak up the view.

The last time I entered a run was a lot of years ago. I can't remember exactly but I think I was in my second year in uni, which makes it roughly half a decade ago. Back then I ran 7km so I knew I was capable of at least finishing the 7.7km this time around. Besides, I wasn't about to let the guys at work take the mick by not finishing.

It took me roughly 75mins to complete the run that night. I'd say 75% of that time was spent walking whilst the other 25% was spent running and being generally out of breath. Still, it was fun being occasionally out of breath. We regrouped after the run and went out to dinner tired, but happy. Running really is a healthy exercise. I should really do it more often. 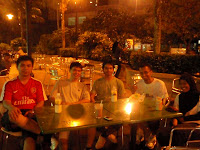 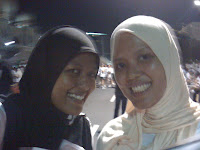 All in all, 2009 was a really good year. I completed my graduate studies, got a job and I was content, if not happy, for the most part. And I have a lot of expectations for the year 2010. I reckon, and strongly hope that L.O.V.E of every kind will play a huge role this year in my life. As it is, Dude got engaged. A few of my close friends got engaged too and one just got married all within the first 58 days of this year. And I expect there to be more soon.

I'm also grateful that since the year started, I've been able to reconnect with a lot of people from the past, be it from high school or primary school, or even the not so distant uni. I just hope this whole thing picks up momentum and doesn't run out of steam.

I'll be off now. My fingers aren't bleeding but the Stoke - Arsenal match kicks off in 15 mins. Till later.