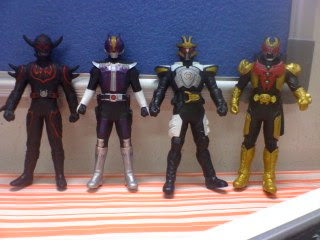 (in a tv-show-announcer-like-voice)
2nd from the left, standing 1.8m tall and weighing 95kg, its Nega Den-O!!! Next, its Kamen Rider Rising Ixa. With a punching power of 20tonnes and a kicking power of 12tonnes, this kamen rider will surely beat any fangire to pulp. and on the right, with a shiny gold armour and a maximum kicking power of 150tonnes (Emperor Moon Break), its Kiva's Emperor Form. oh yeah, and last but by no means least, its Negataros (far left), the imagin who wreaked havoc by teaming up with the fangires.

heheh. lookie look look! i used my raya money to get them. cool arent they? i personally like Kiva's emperor form the most. there's something really awesome about the whole regal look.

i kinda wonder about the target audience of kamen rider shows. i mean, i doubt that kids understand the plot. heck, i dont understand the plot sometimes. take kamen rider den-o for instance. it took me a looong time to process all that info what with the time being destroyed and then restored and the sister's fiance being zeronos and all. seriously, there's more drama in the last 15 episodes of den-o then the whole 90+ episodes of Bella (not that i was watching of course).

therefore, you guys should try watching kamen rider. the action sequence and the effects arent half bad either. but its the plot that would really keep you glued to your seats.

as some of you might have already known, i'm a bit of a stalker. not in a bad way of course. i just like to read people's blogs and make my own assumptions about what goes on in their heads. so there i was, reading people's blogs, when i noticed a massive difference between their posts and mine. other people's entries are always so deep. mine is shallower than the kiddy pool outside of klcc. so i thought to myself 'you've got to post something deep' and i started writing. to my huge disappointment, i never got further than two lines. guess you can't fake depth huh? gyahahaha!!

today we (042 aerospace students) went to wangsa maju for lunch. it was really rather impromptu and fizah ended up missing her last aircraft design class but it was well fun. somehow or other we ended up main teka-teki, like we did during our last outing. here's one. its from petet.

"there are 4 fish in a fish tank. one day, one of the fish dies. the next day, the owner of the fish tank found that the water in the tank was almost at the top. why?"

hello blog, hello people who read this blog (if there are any), been a while hasnt it?

are you done stuffing your faces yet? i reckon the face stuffing gala is only just beginning. prepare your stomachs for more food cause i bet this weekend will bring you even more open houses. isnt raya great? (^_^)

i couldnt sleep two nights ago. it was horrible. i got back to my room from the lab sometime past 11pm. after settling down, i thought i'd catch up on a bit of naruto. after watching 2 one-hour episodes of naruto, i was still wide awake. it was past 2am by then. so i thought i'd just try and sleep but a few minutes of tossing and turning made me realise that my efforts are absolutely futile.

after a few more moments of wondering what i should do (none of which involved getting up and studying), i stumbled across a brilliant idea. baba toru and ookawa genki (yagyu and akaya from tenimyu) both came out with this cd where they count sheep. its called the hitsujide oyasumi series and its basically them counting sheep accompanied by soothing background music. i thought i'd give it a listen and see if it'll help...


(half an hour later)


lets just say that all this would only have been useful if i were a farmer in japan who has 400 sheep. 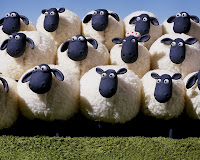