Posted by kiren baharuddin at 12:12 PM 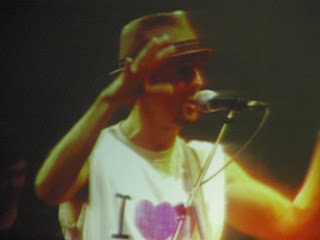 went to his concert last night and i only have 1 word. adorkable. hehe. he's awesome. that tshirt he's wearing in the pic, it says i ♥ kl. how awesome is that?

the concert was at stadium negara and never have i seen it so full. it wasnt that full when inxs played there and it wasnt that full even when muse had their concert there. the air was just humid and stagnant (at least at the rock zone anyway). but it was well fun. he's an awesome singer (vocal range up there with mariah carey) and an awesome performer. even managed to put in bits of wonderwall (oasis's song) into one of his songs (you and i both methinks) which i thought was just awesome.

his band was equally awesome. the brass band (all 3 of them) were wearing malaysia's football jersey. you know, the black and yellow stripey one, instantly endearing themselves to everyone who went to the concert, despite the weird situation and the heavy criticism the football team is under right now. 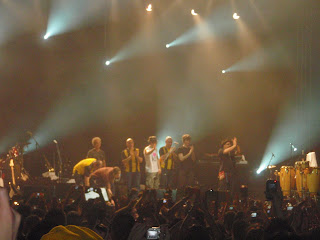 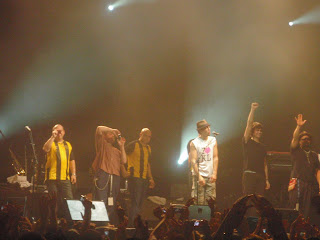 he played all the songs that i hope he would except wordplay and curbside prophet. but songs like life is wonderful and dynamo volition more than made up for those songs' absence. he really had the crowd going. despite the (almost) unbearable heat. and he must've said thank you in every language known to the modern man.

all in all he's worthy of every 'awesome' in this post and certainly more. right at the end he said it certainly wont be their last visit to malaysia. i'm really counting on that.

You went the Mraz concert? Although i'm actually much more jealous that you went for Puteri Gunung Ledang. I wanted to watch it again.

Yeah lets! Although I heard that the one they held this year might be the last. :(