Posted by kiren baharuddin at 11:00 PM

but then again, i have really good eyesight. so even when the light at the end of the tunnel is miles away, i'd still be able to see it. call it optimism.

seriously though, we're so close now. after god knows how long of being frustrated/annoyed/depressed/demoralised (delete where appropriate), i reckon we're almost there. but i think i'll stop talking about it for now. dont wanna jinx it. fingers crossed everyone!!!

went to get some stuff for the project on sunday (or was it monday? tuesday? sometime this week anyway) and as always, i got a bit distracted (being distracted comes oh so easily). spent ages browsing through the limited albeit cheap books at this bookstore in amcorp mall and finally... 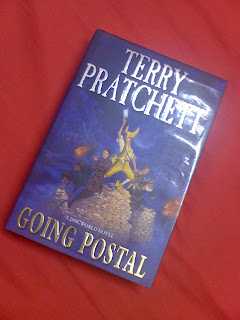 jya~n. its the 33rd book in the discworld series and, as expected, its absolutely hilarious. i lo~ve terry pratchett's discworld. i'm still laughing from the last discworld book that i read (small gods). its awesome times infinity squared!! lighthearted and smart. like this from Going Postal on page 35.

" 'Apprentice Postman Stanley,' mumbled Groat. 'Orphan, sir. Very sad. Came to us from the Siblings of Offler charity home, sir. Both parents passed away of the Gnats on their farm out in the wilds, sir, and he was raised by peas.'
'Surely you mean on peas, Mr Groat?'
'By peas, sir. Very unusual case. A good lad if he doesn't get upset but he tends to twist towards the sun, sir, if you get my meaning.' "

Hahahaha. That's hilarious. anyone who tells me otherwise has no sense of humour and should go find some. you should read the part about the number pi. there's always some theories and stuff and sometimes it all makes complete sense.

there was this one bookstore that i went to where they put terry pratchett under the children section. thats a bit unfair i think coz adults wont go near the children section so they wont ever get to know how awesome a writer he is. i'm slowly collecting all the discworld series. and i mean verry slowly. slower than a glacier. which is a bit of a shame and is exactly why i should get off of my bum and start looking for a job.

enough fangirling. the weirdest thing happened just now. i was texting faiz and then suddenly my fingers went faster than my brain. i'd only just worked out what i wanted to write but when i looked at the screen i realised i'd already written it. that cant be right can it? fingers thinking for themselves and making their own decision. its like a decentralized organizational structure (rare chance of applying my organizational behaviour knowledge). next thing i know they'll be painting their nails pink and signing up for marathons without me knowing.

right then. i'm off. have to wake up early tomorrow to get some stuff for the project. somehow or other we'd always end up realizing that we need something important a day after out trip to Ara Damansara and/or SS2. call it poor planning? yep, that sounds about right. but in my defense, we're only just learning.

Oh..btw, you're it!
i tagged you. Read my blog.
http://aishahanamohamood.blogspot.com/