I just got the most awesome news ever! My darling Kak Ima, who was my roommate when I was in 2nd year, had safely given birth to a baby girl!

Isnt that awesome? Giving birth is like the ultimate task for a woman. You cant be anymore woman-er after you've given birth. That's it. You've done your job. I hope the baby grows up to be as awesome as the mother, or maybe even awesomer, what with all the help she'll be getting from aunt kiren.

I was watching Man vs Wild last night. Thats a cool show. You can pretty much put Bear Grylles anywhere, save Mars. Where do I find a hot survivor like that? Straying away a bit there. My point is, after watching the show, I got to thinking. The title of my blog is firestarter, and I'm a self-professed pyrophile (fire's pretty) but I doubt I could start a fire without having a lighter or a match or a cooking stove. So I wonder whether I should change the name of the blog...

its also interesting to note that animals speak differently too! dont believe me? check this out.

see what I mean?

onto more serious matters. have you seen these type of things floating around newspapers and billboards? 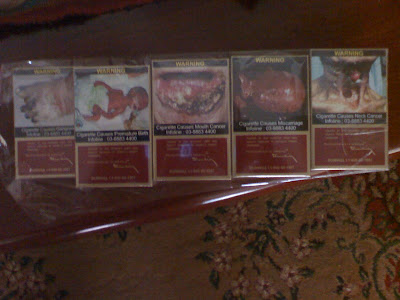 i'm pretty sure you have. gross isnt it? disturbing isnt it? gives you nightmares doesnt it? i reckon the new packaging did a great job in grossing people out. but does it really work? i dont think so. apart from traumatising the faint hearted non-smokers like me, the campaign isnt doing much. how do i know?
exhibit 1 - the carton of cigarettes in the picture above is my dad's
exhibit 2 - dude's bf continues to smoke albeit the gross pictures on the packs
exhibit 3 - patron of the mamak store: mamak! kotak rokok lain takde ke? yang ni geli la.
i think smokers are completely missing the point here. the pictures are meant to deter you from smoking, not make you ask for a different pack. seriously. i wonder what it takes.
Newer Posts Older Posts Home
Subscribe to: Posts (Atom)